What would you say if I told you that I lived through a real-life paranormal horror movie, and that you could too? Some of you may scoff and steer clear of it, but those of you who have an eye for the darker side of life may have your interest piqued. On a warm July evening in Black Creek Pioneer Village, Jaymes White ran a séance and scared the hell out of everyone in the building, and I was lucky – or unlucky – enough to be a part of it.

Séances are a form of spirit communication that have been around at the very least since the spiritualism boom in the 1800s. The Fox sisters

, Margaret and Kate, are credited with being a large part of getting spiritualism off the ground, though they were later discredited by their own statements about the séances they ran being staged. Conjure an image in your mind of a séance; presumably you’re imagining a circle of folks all clasping hands around a table with candle and maybe a Ouija board in the middle. The medium leading the séance is likely asking a series of questions with confidence and gusto. “Is anyone there?” “Are you in pain?” “Do you know that you’re dead?” among others. Perhaps the candle flickers in response, or maybe the medium acts as a conduit slurring responses in a voice not their own, but most likely, you’re hearing a series of knocks in response to the medium’s questions. “Knock once for yes, twice for no.” If any of this is what you’re imagining, you’ve got a fairly accurate idea of what a traditional séance looks like. According to the Fox sisters, however, those knocks so prevalent in their séances were merely the sisters cracking their bones in a way they had oft practiced. Their frequent conferences with a spirit called “Mr. Splitfoot” were a fabrication. 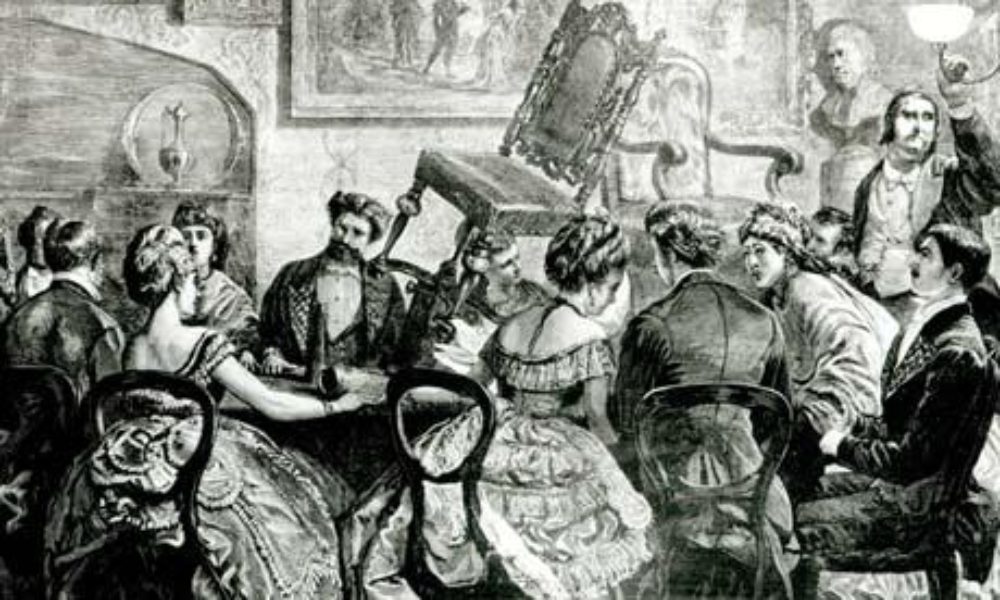 Despite the fact that some of the very mothers of spiritualism were denouncing the practices as lies and delusions, the movement continued and even gained momentum. Perhaps it was a morbid curiosity, or a fear of what comes next, but a section of humanity disregarded the confessions and kept with their search for answers. We’ve even had commercialized spirit communication in our homes since the 1890s, when the Ouija board was invented.

Since then, a number of horror stories in the form of truth, legend, mythology, folk tales, and film, have spread about spirit contact. We’ve all heard of the Bloody Mary legend where you speak her name thrice in front of a mirror and she is summoned to exact her revenge. Maybe you’ve heard of the lesser known “Three Kings” ritual, or the Charlie Charlie Pencil game that went around the internet in mid-2015. These kinds of things are all good fun when you’re a skeptic with a somewhat open mind, but for a true believer in the power in the unknown, the ease of access that comes along with these types of things being in vogue can be very concerning. You never know what you’ll bring through, and the layman likely won’t be using the proper protective procedures.

This is where Jaymes White and the Haunted Walks come in.

If there is anyone you’d trust to take you through a séance, it would be Jaymes. He is a well-known mentalist and his background in hypnotism and suggestion makes him a believer with a skeptic’s edge. He knows human psychology extremely well, and he is the first to suggest ways in which one’s head may have tricked them into believing that something explainable was actually paranormal. Despite his grounded and realist nature, he still revels in the mystical and leads the participants in the séance through an evening of surprise, terror, and absolute amazement.

When you first arrive at Black Creek Pioneer Village, you are greeted by the cloaked 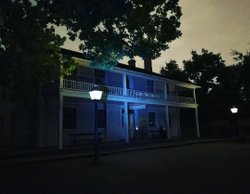 hosts of Haunted Walk. To give you an idea of what awaits you, every participant is asked to sign a waiver releasing The Haunted Walk and Jaymes White of any liability for the usual injuries and death, but with an addendum that you will not come after them if something paranormal follows you home. Once everyone has arrived, a guide gives the group a tour of the village and a macabre history lesson. You hear about the spiritualism movement and the collection of buildings on the property, including the stories of the folks who once inhabited the notoriously haunted end destination where the séance is set to take place. There is something about hearing ghost stories by lantern-light in the dead of the night that really sets the mood for the experience you’re about to have. Needless to say, by the time you enter the séance, you’re already at least a little bit on edge. 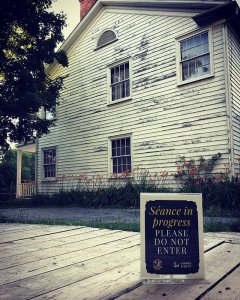 Once you’re in the building, you finally get to meet the person who will be guiding you through your paranormal expedition. Jaymes White enters the room bearing a wooden box, and after a short discussion has a volunteer open the box and hand the crystals inside to all participants. They are to be your protection for the evening; as long as you hold them, you should be safe. The small group goes on to take a small tour of the dwelling, eventually landing in the front room where a circle of wooden chairs is arranged around a small table. There are discussions of your past paranormal experiences and your level of skepticism, and a promise is made to disclose to the group anything that happens throughout the evening. With that, the séance begins. Now, I won’t give any spoilers here, because you should really take part in the experience yourself, but let me tell you it was one of the most terrifying evenings I’ve enjoyed in recent memory.

Jaymes makes use of bells, Ouija boards, and many other more traditional tools to help any spirits come through – and it worked. One of the things that was most compelling about this experience was that Jaymes allowed you to walk fairly freely about the building, so if you heard something in another location, you were encouraged to go investigate. There were a series of occurrences that seemed unexplainable – despite Jaymes’ attempts to explain them away with psychology – and the evening was so intense that when it came to its conclusion, every member of the group fled as quickly as they could. With Jaymes’ protective presence, we all made it out alive and without any demonic attachments (that we know of), but I definitely slept with the light on and the crystal handy that night.

The Séance at Black Creek has added additional dates, and is now running virtually every weekend from now until November 10th. If you have a penchant for the paranormal, are in the Toronto area, and want to take part in a Victorian-style séance, this is your chance; Tickets are available at https://hauntedwalk.com/the-seance/ but are selling out fast. It’s absolutely worth the price of admission to have an experience unlike anything else out there.