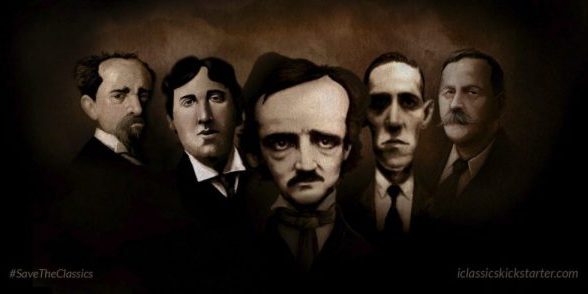 As big fans of Edgar Allan Poe’s tales, we couldn’t resist trying the iPoe app when we discovered it in the iClassics series. Poe’s works don’t need any extra features  to be awesome, but they become a completely new experience with animated illustrations, suggestive music, interactivity and a terrible fright at the end. After using iPoe, we couldn’t wait to read the second anthology, iPoe-2, and then iLovecraft, and then… well, let’s allow the creators of the iClassics apps to tell us their own story:

The Fiction Anthology (TFA): How did Play Attitude start?

David: Play Attitude originated from the need we had, as a creative agency, to work on more personal projects. A creative agency works for other brands and companies and, sometimes, ideas are somewhat limited by the customer. The book The Forgotten Colors was the kick off to a new path, as the editorial that ended up creating Play Attitude and all the books that came after.

TFA: The interactive ebook format is relatively new (practically born with the iPad) At what point did you decide that this was the format you wanted to use?

Naiara: What we do is very different from an ebook. We go far beyond what a digital book can offer. At iClassics, we add moving illustrations, music, sound effects, typography, and more,  making reading an interactive experience that immerse you in every tale.

In 2012, we discovered interactive books for the iPad. although we loved the idea,  we thought that they didn’t fully exploit the potential offered by these devices. There were some animated elements, but they didn’t contribute much to the stories. So we decided to experiment, ourselves, with Edgar Allan Poe’s tales. David G. Forés (illustrator & co-founder of iClassics) is a big fan of Literature and especially this author. Besides, Poe’s most famous works are short stories, rather than lengthy novels, which made a perfect testbed. We ended up with the iPoe Collection, which had great results and a successful reception. This experience gave us wings to continue with new stories and authors.

TFA: Is that how iClassics started?

David: Great reception followed the first two volumes of the iPoe Collection, which led us to start really believing in the project. We looked for private funding and eventually got the capital for iClassics. We gathered an excellent team and got to work. Right now, we need another push to publicize the project, expand the genres and authors we work with, add translations and, most importantly, expand to Android and Kindle platforms. We are running a Kickstarter campaign until July 6 for the resources to consolidate our upcoming projects: https://www.kickstarter.com/projects/davidgfores/iclassics-reimagining-poe-wilde-lovecraft-and-more/

TFA: Did you have experience with interactive stories before iClassics, or was it more a matter of experimenting and “playing”?

David: Because of the novelty of this medium, it was a matter of experiment and play. The experience we tried to create with iClassics is influenced by film and animation. Unlike those formats, the pace of the narrative is controlled by the reader. In a film, rhythm is determined by the director. We had to do many tests so that animations, sound effects, and the soundtrack matched the reader’s pace of reading and interactions.

TFA: Which author was the biggest challenge to illustrate? Which one was the closest to your aesthetic, and which one made you feel the proudest?

Naiara: The iClassics are not illustrated by a single person. We select one illustrator or another based on what the author and the aesthetic of the story asks for. So far we collaborate with David G. Forés (iPoe & iLovecraft) and César Samaniego (iDickens & iWilde) Recently, we hired two new illustrators, Jordi Solano and Aitor Prieto.They are already working on new titles. Each iClassics is conceived as a unique and exclusive piece, so it is not possible to compare them. The entire project iClassics excites and motivates us. Reinventing classical literature in this beautiful way is what really make us proud.

TFA: We are looking forward reading the last iWilde, because we don’t know too many of his fantastic stories beyond Dorian Grey. How do you decide which stories to adapt?

David: Choosing the stories that we will produce is a rather complicated decision. We choose those that are better known, that are also able to provide us with the most material for interaction, illustrations, and effects. For example, one of the first stories we adapted was The Tell-Tale Heart by Poe. When the sound of the beating heart that haunts the protagonist is played throughout the entire story, the reading experience takes on a new dimension. In the case of iWilde, we selected three stories: The Happy Prince, The Selfish Giant and The Nightingale and the Rose. Besides being wonderful, they allowed us to diverge from the  dark and gothic atmosphere of our previous projects.

TFA: Who will be the next iClassics author and why?

Naiara: iDoyle is the next iClassics to launch in mid June. It makes us really happy, because Sherlock Holmes is one of the most requested titles from our fans. We are sure that you will love it.

About future iClassics, other pending  authors are Jack London, at the centennial anniversary of his death, and Washington Irvin, with The Legend of Sleepy Hollow—perfect for Halloween! And of course, there are many stories of Lovecraft and Poe we want to continue doing.

They just launched a Kickstarter  campaign so that we can help them adapt more authors in more languages and platforms, and to make them available in schools.

If you want to participate you just have to click here.

TFA: Why did you decide to do the crowdfunding campaign?

Naiara: Because crowdfunding is a wonderful way to build community around your project. And not only that: you received a lot of feedback from fans about the product, and this allows you to improve it with their help.

TFA: What painters and designers do you admire? Who are your inspirations?

David: Phew! Trick question… the list is endless. We are great admirers of nineteenth century painters, such as Alphonse Mucha or Ramón Casas. We also get inspiration from contemporary illustrators like Frank Frazetta and Norman Rockwell. Of course, we also draw from excellent young illustrators like Abigail Larson and Miki Montlló, who we are honored to collaborate with in the illustrated book that you could find as a reward in our Kickstarter campaign.

TFA: What literary or cinematic works in horror and fantasy inspire you?

David: My main source of inspiration is comics. In the iClassics office, we have shelves full of comics. There are 1970s magazines  from the American publisher Warren (Creepy, Vampirella, Eerie), which adapted horror stories by Poe, Lovecraft, etc, into comics. Cinema is another infinite source of inspiration for many of the devices we use. Some of our favourite directors are Tim Burton, Guillermo del Toro, Terry Gilliam, and J.A. Bayona.

TFA: Have you gotten nightmares after spending so much time in the insane universes of writers like Poe or Lovecraft?

Sofía: Except for David, who has always been passionate about horror, the rest of the team has acquired a kind of immunity to the genre of the macabre. We even renamed the creatures of the stories and made jokes about them. For example, in the office, we have 5 or 6 different ways to pronounce Cthulhu‘s name, each one more difficult and farfetched. However, if we are honest, once we enjoyed these works as they should be (with the lights off and headphones on), almost everybody let out a cry.

TFA: Are you proud of scare us at the end of each story?

David: If it’s an horror story, of course. That means we’ve done our job well and we got you immersed in the story.Nothing makes us happier than to read your comments
about how terrifying the experience has been.
Anyway, we would like to assure the people who are afraid of horror stories that we have iClassics productions that are not within the horror genre, such as iWilde or iDoyle. So fear is no longer an excuse for not experiencing an iClassics

TFA: The interaction and animation in your e-books are becoming more elaborate. Are you becoming more comfortable with this kind of illustration? Do you plan to create complete animations, such as animated shorts, any time soon?

David: All that is thanks to our programming team and R & D work. We are restless and curious, always looking to find new ways to improve the experience.  We learn more with each new iClassics , so the results become more and more elaborate and spectacular.
In terms of short films or animation, it is something that we are not thinking about right now because of the team structure. We have neither the means nor the tools to produce animated short films, but we are not ruling anything out. If a producer is interested in creating something with us, he just has to contact us.

TFA: It’s easy to see that, besides being gifted illustrators, your team also has a talent for narrative and storytelling. Will there be original stories by you?

Naiara: So far, we are very focused on the classic books.
We believe it is important for these works to endure over time, and iClassics is a good way to make this happen. Literature today owes to all those authors who were ahead of their time and inspired later generations. Beside, we’ve already experimented with original stories in The Forgotten Colors and in Inspiration Dormant, with Carmesina as the main character. We loved the experience, so we would love to go back to that someday.

TFA: Any message for fans of the iClassics?

Sofía: We  launched a Kickstarter campaign on May 24th and we need it to be disseminated as widely as possible. Help us get classical literature everywhere! And, of course, a huge Thank You to all the fans. Without your support, iClassics would not have been possible. All the work we do pays off the moment that one of you sent us a message to let us know how much you like what we do.

TFA: And for creators around the globe?

David: Believe in what you do and never give up. Sometimes life takes you from one place to another on an indirect path. We ourselves have been a creative agency, a publisher, and, finally, creators of experiences. Everything comes if you really believe in yourself.

Thank you to David, Naiara and Sofía for this interview and for creating these awesome Apps.

If you want to be part of them now you can in Kickstarter.  The rewards are great and you can help to bring the iClassics to the new generations.

If you have any question you can contact them: hello@iclassicscollection.com

Or through the social networks: