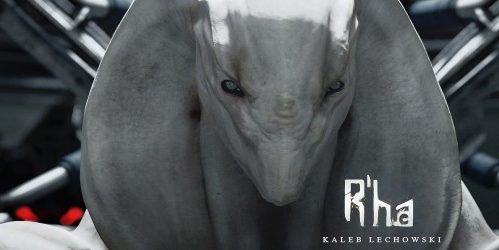 “I got up at seven in the morning (…)  I found a message from Scott Glassgold telling me (…) he wanted to help me turn R‘ha into a movie, with a Hollywood studio presumably. Yeah. “

That’s how Kaleb Lechowski, author of the short film R’ha describes the beginning of his Hollywood Fairy Tale. The dream of any independent film creator: you publish your master piece on the internet for free, it’ becomes a big success and Hollywood is knocking to your door.

“I went to Hollywood for two weeks pitching my story ideas to executives, producers and agents. I met people from all the big studios.”

But as usually fairy tales tell you, magic comes with a price, and sometimes it’s difficult to swim with big fishes when you’re the smallest one. Everything is slower and less straightforward than what you expected.

The Fiction Anthology (TFA): Tell us a little bit about your history before R’ha.

Kaleb Lechowski: Together with my brother and a friend I started working on a computer game, when I was thirteen or fourteen. It was the first contact with any 3D application. Our game engine was very limited and the scale of our concept was way too much to handle by ourselves, so we cancelled the project and I turned to Blender instead. I could look back at eight years of on and off experience of working autonomously in Blender before I even got to the university where I created R’ha as my very first 3D animated short film.

TFA: How long did it take to finish the short film and how many people was involved?

Kaleb: I worked on it for seven months, including a break to marry my wife and even go on our honeymoon afterwards. I was the only one working on the animation but David Masterson provided his wonderful voice work and Hartmut Zeller gave it its amazing sound.

TFA: You had meetings with the biggest studios in Hollywood (Paramount, Fox, Warner Bros.) How does it work? I guess somebody arrange the meeting for you, am I correct?

Kaleb: They call my manager, he figures the best time, maybe arranges some smaller meetings first so I get used to pitching the story, and then you drive their to just talk with the people. Sometimes on a sofa, sometimes at a large conference table. It was always very friendly and they were excited to speak to me, I felt.

TFA: Did you arrive to LA with your pitch well prepared? Were you nervous?

Kaleb: Not as nervous as I would have thought. Scott Glassgold, my manager prepared me well and his business partner asked me a ton of tough questions during our preparation, so I would know how to respond if the producers would ask the same.

TFA: Rumours say that Hollywood studios are rule by business/marketing experts rather than film/art expert. Did you get that feeling? How difficult was for you to make them to understand your ideas?

Kaleb: I didn’t get that feeling. They understood my ideas very well.

TFA: Would you change anything after that intensive learning experience?

Kaleb: Rather than follow anybody’s plans I would have just kept creating more short films.

TFA: For how long did you develop R’ha for them?

TFA: Was all the development you make for them unpaid? Did you have to keep a daytime job?

Kaleb: I was never paid and tried to take on some freelance jobs on the side, but most of them
were underpaid. The general notion was that the film would be funded very soon, but it never happened.

TFA: You mention on the Kickstarter video that they make you to deviate a lot from the original idea, but sometimes in the creation process, deviations, as restrictions, inspire your imagination. Are you going to keep any emerged element from that deviation?

Kaleb: I have never developed the movie in a direction I didn’t like and I still think it’s a bad idea to have humans in the film just to get a chance to have a known actor’s face in it.

TFA: So you met JJ Abrams and Ridley Scott? Let me ask this another way:

So YOU MEET JJ Abrams AND Ridley Scott?!?!

Kaleb: No. I was at Bad Robot and Scottfree (Scottfree twice even) but I haven’t spoken to the two. I’ve been told though that J.J. himself saw my movie and brought it up, saying I should be invited. He himself was occupied with the post production of Star Trek I believe.

Kaleb has just started a new Kickstarter crowdfunding campaign so now the fans could have the opportunity of finance themselves the genuine second part of R’ha short film. Or, if we all donate enough money, a superb and full Feature Film

TFA: After all these adventures, is R’ha – The Movie developed and ready to be financed?

Kaleb: A movie is a living thing and always changing. When is it ever ready?

TFA: I hope this time it’s not going to be a “one-man band” anymore, is it?

Kaleb: I sure hope so, too. Currently the campaign trends towards barely reaching the 40k minimum. If that’s the case it will in fact be a “one-man-band” again, more or less. There’s of course always going to be great people that will try and help me out either way, as they simply believe in the project. David Masterson, the voice actor for example and Sam Redfern, my guy for the music.

Kaleb: We only need another 400 supporters to reach our minimum goal. Millions have seen the movie, so if all the fans out there could help get the word out that R’ha is on Kickstarter, I would be eternally grateful!

TFA: And with your fellows Genre-Film creators?

Kaleb: I hope I will achieve something for all of us, so we can create unique and innovative projects.

Thank you Kaleb to share your experience with the community.  The best of luck in Kickstarter because we WANT to see the continuation of R’ha and its movie.

To know make it possible:  Kickstarter