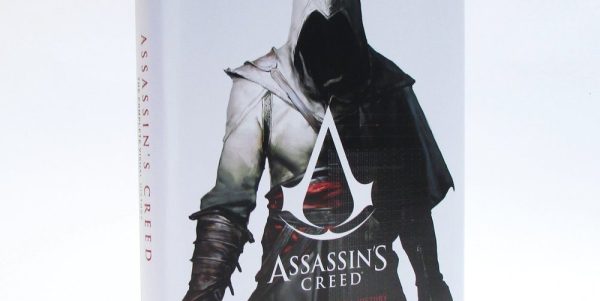 We went to an event for the release of the book Assassin’s Creed® The Complete Visual History at the Indigo bookstore in Montreal. We’re big fans of the Art in the Assassin’s Creed franchise, and the event was  an awesome introduction to what’s inside the book.

Raphaël Lacoste (Franchise Art Director on Assassin’s Creed) spoke about the origins of the first Assassin’s Creed game. He was one of the artists responsible for designing a “new kind of hero”. Assassin’s Creed was heir to the acrobatic and exotic Prince of Persia, but with a crucial difference: “We were going to a more realistic direction,” says Raphaël. The video game was set against the backdrop of  actual history, with some small liberties taken in the areas that were not well documented. Because of this, the video game franchise can grow in a natural and organic way.

You can find some of the Raphaël’s amazing art (which I’ve had as wallpapers for years) here.

Since the beginning, novels, comics, and a web series (Assassin’s Creed Lineage), satiated fans’ hunger  to learn more about different assassins through the History.

Anouk joked about being “kind of the Cerberus of the franchise”, having to constantly ensure the coherence of this growing universe.  Anouk arrived at the book release from the set of the bigbudget Assassin’s Creed – The Movie, starring Michael Fassbender. She couldn’t tell us anything about the movie, because I guess then she would’ve had to kill all of us.

You can find an interesting interview about the book and Anouk’s role in the saga here.

The book is highly recommended for fans of the video game or those are just fans of its visual quality, like me. You can find a teaser online, but the previews are nothing compared to having those amazing pieces of art printed inside a beautiful book. I was lucky having mine signed by creators of the book.